This chapter provides an overview of the framework of a typical scRNA-seq analysis workflow (Figure 5.1). Subsequent chapters will describe each analysis step in more detail. 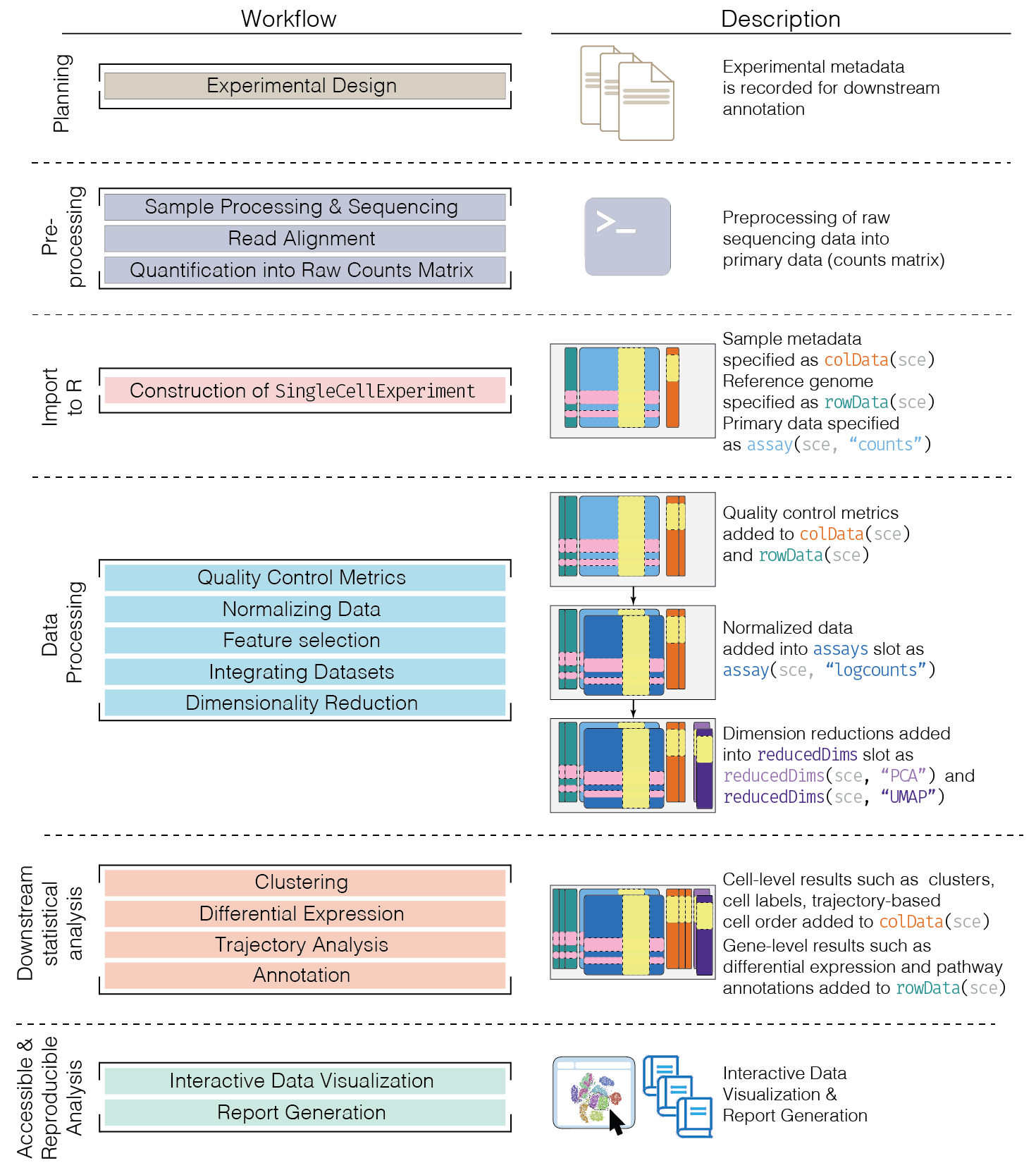 Figure 5.1: Schematic of a typical scRNA-seq analysis workflow. Each stage (separated by dashed lines) consists of a number of specific steps, many of which operate on and modify a SingleCellExperiment instance.

Before starting the analysis itself, some comments on experimental design may be helpful. The most obvious question is the choice of technology, which can be roughly divided into:

Each of these methods have their own advantages and weaknesses that are discussed extensively elsewhere (Mereu et al. 2019; Ziegenhain et al. 2017). In practical terms, droplet-based technologies are the current de facto standard due to their throughput and low cost per cell. Plate-based methods can capture other phenotypic information (e.g., morphology) and are more amenable to customization. Read-based methods provide whole-transcript coverage, which is useful in some applications (e.g., splicing, exome mutations); otherwise, UMI-based methods are more popular as they mitigate the effects of PCR amplification noise. The choice of method is left to the reader’s circumstances - we will simply note that most aspects of our analysis pipeline are technology-agnostic.

The next question is how many cells should be captured, and to what depth they should be sequenced. The short answer is “as much as you can afford to spend”. The long answer is that it depends on the aim of the analysis. If we are aiming to discover rare cell subpopulations, then we need more cells. If we are aiming to characterize subtle differences, then we need more sequencing depth. As of time of writing, an informal survey of the literature suggests that typical droplet-based experiments would capture anywhere from 10,000 to 100,000 cells, sequenced at anywhere from 1,000 to 10,000 UMIs per cell (usually in inverse proportion to the number of cells). Droplet-based methods also have a trade-off between throughput and doublet rate that affects the true efficiency of sequencing.

For studies involving multiple samples or conditions, the design considerations are the same as those for bulk RNA-seq experiments. There should be multiple biological replicates for each condition and conditions should not be confounded with batch. Note that individual cells are not replicates; rather, we are referring to samples derived from replicate donors or cultures.

Sequencing data from scRNA-seq experiments must be converted into a matrix of expression values that can be used for statistical analysis. Given the discrete nature of sequencing data, this is usually a count matrix containing the number of UMIs or reads mapped to each gene in each cell. The exact procedure for quantifying expression tends to be technology-dependent:

After quantification, we import the count matrix into R and create a SingleCellExperiment object. This can be done with base methods (e.g., read.table()) followed by applying the SingleCellExperiment() constructor. Alternatively, for specific file formats, we can use dedicated methods from the DropletUtils (for 10X data) or tximport/tximeta packages (for pseudo-alignment methods). Depending on the origin of the data, this requires some vigilance:

In the simplest case, the workflow has the following form:

Additional steps such as data integration and cell annotation will be discussed in their respective chapters.

Here, we use the a droplet-based retina dataset from Macosko et al. (2015), provided in the scRNAseq package. This starts from a count matrix and finishes with clusters (Figure 5.2) in preparation for biological interpretation. Similar workflows are available in abbreviated form in the Workflows.,

Figure 5.2: UMAP plot of the retina dataset, where each point is a cell and is colored by the cluster identity.